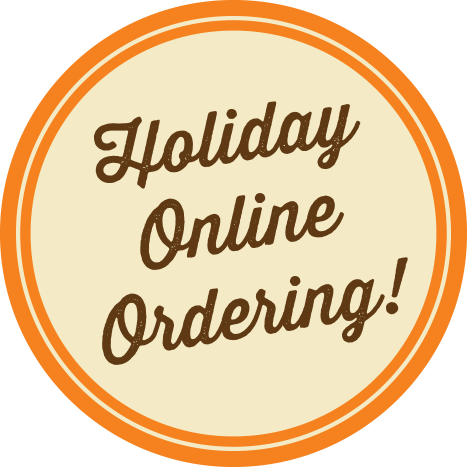 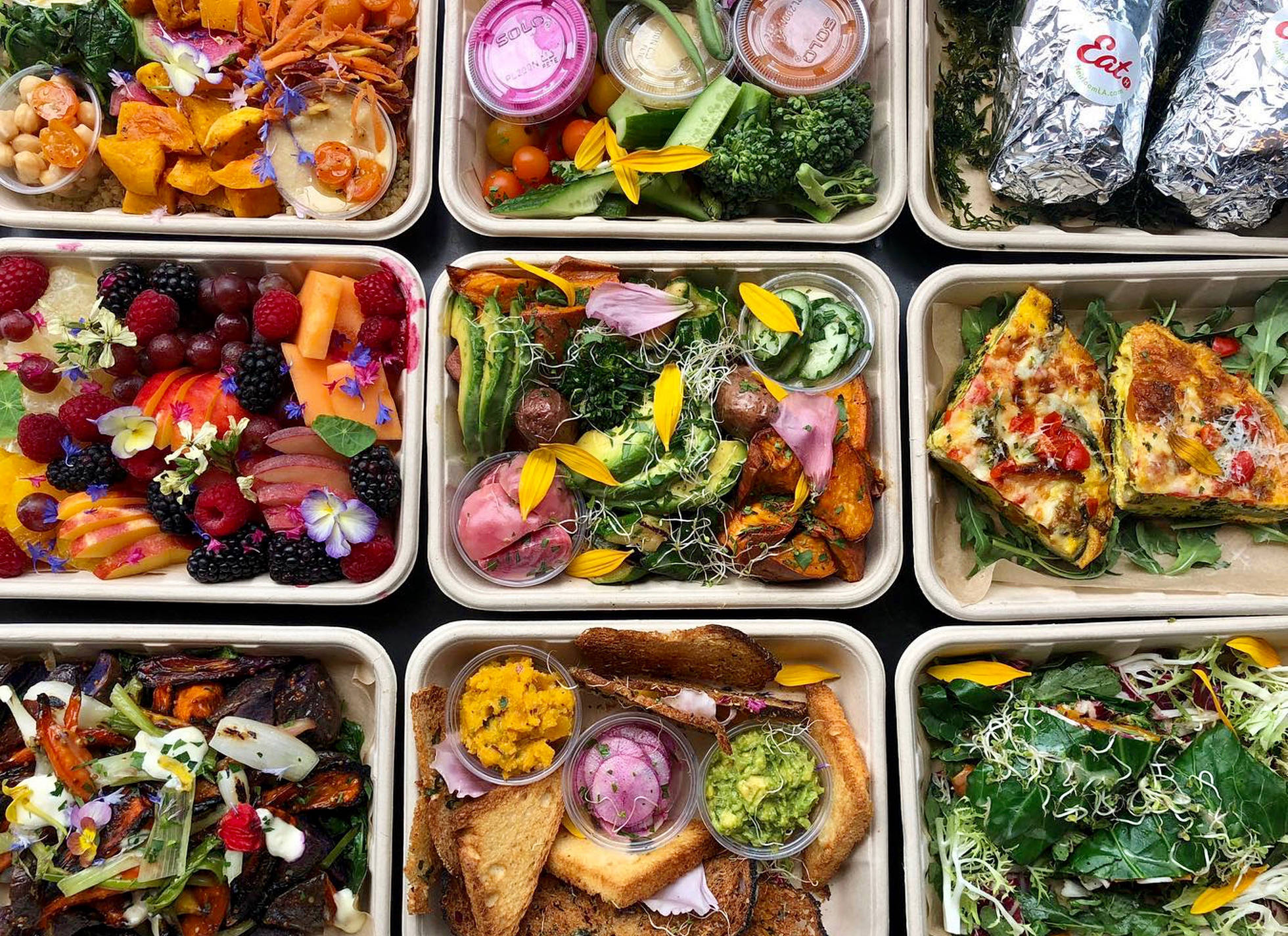 We are committed to supporting our small, local, beyond organic farmers by offering healthy food for you, and also by distributing nutrient-dense meals to our hospital heroes and our most vulnerable communities. Be safe, be healthy. 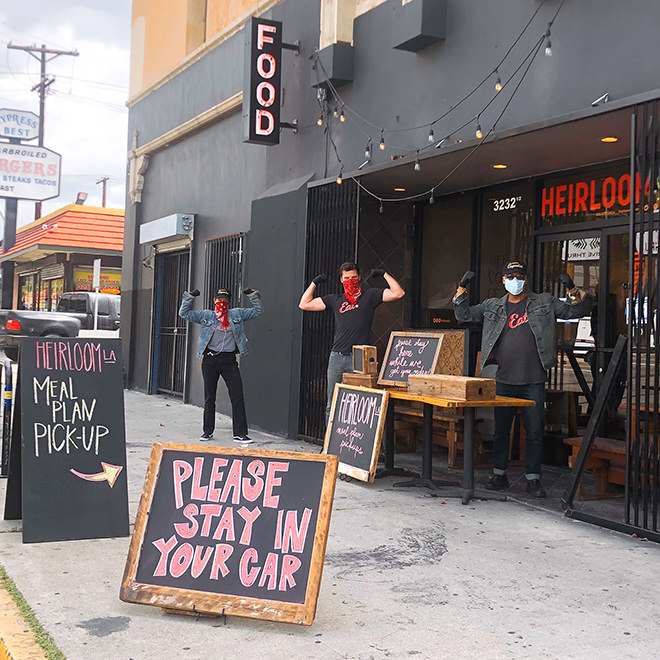 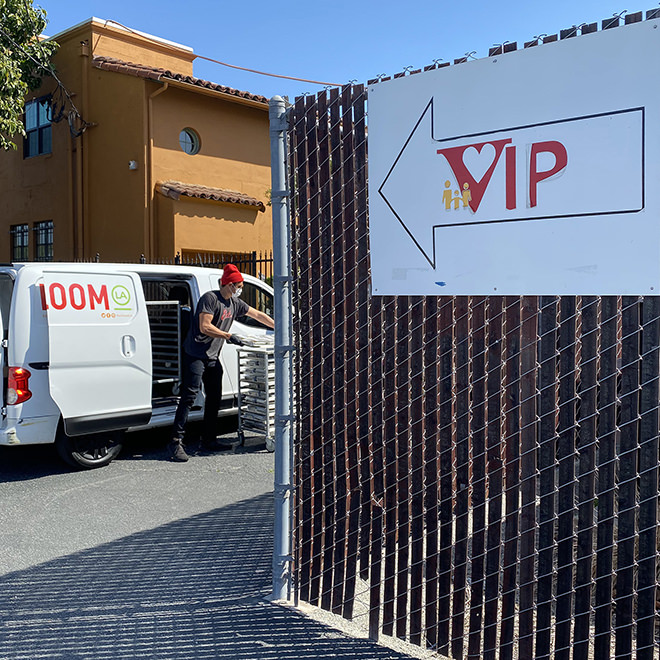 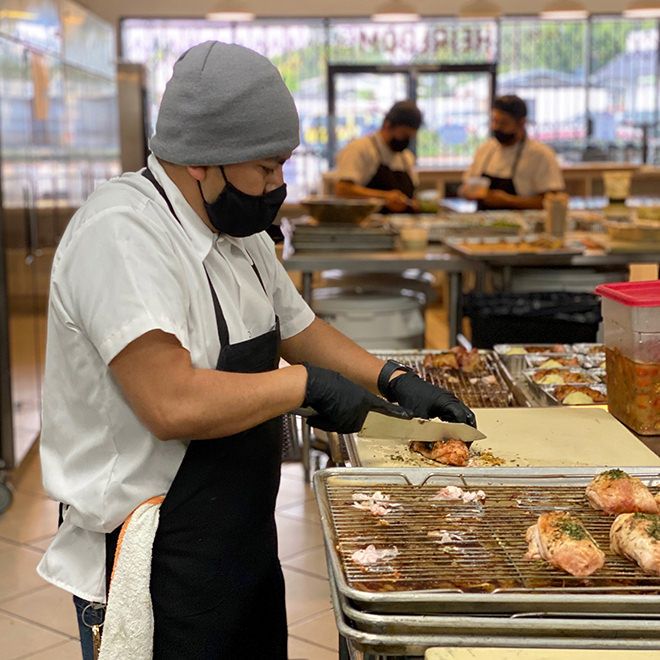 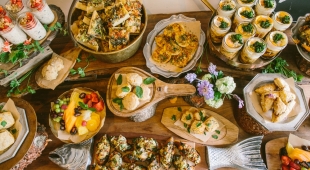 BRUNCH BUFFET IN THE SALON
We hosted a brunch buffet in The Salon for some ladies aging out of the foster care system, and taught them how to make a proper omelette and an egg white "mocktail". Our friends from Casa de Perrin joined us to demonstrate how to set a formal table with their beautiful wares, and Yasmine Floral Design helped the ladies make floral crowns. We set up a 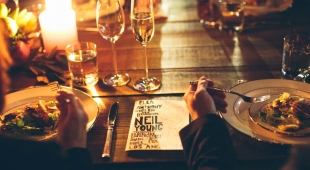 Fundraiser at The Paramour
Flea of The Red Hot Chili Peppers hosted a fundraiser for 500 at The Paramour for his non-profit Silverlake Conservatory of Music with special guest performer Neil Young. Appetizers were served as guests placed bids on various illustrious donations hanging throughout the mansion. Once guests took their seats, small platters of crudités were placed on each table and the first course of salad was served as the Red Hot Chile Pepppers performed. Dinner was served family style with several vegan options, and dessert was very casual nibbles to snack on while enjoying an unforgettable serenade of "Harvest Moon". 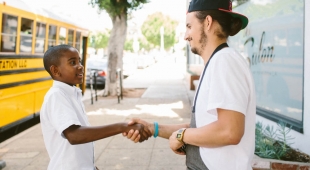 Cooking Class at HLA
After a couple of years conducting cooking and nutrition classes at Challengers Boys and Girls Club in South Los Angeles, we wanted to conduct an intensive food awareness class over at our place. We set up stations in our garden parking lot where several of our chefs helped the children prepare dishes for a BBQ lunch. Then we set up bleachers and brought out a whole pig to break down as we talked about how it related to different food parts like bacon and pork chops. At first the children were horrified, but then they were intrigued. We feel confident that this experience made an imprint on their memory so that they will always understand that an animal is behind eating meat. 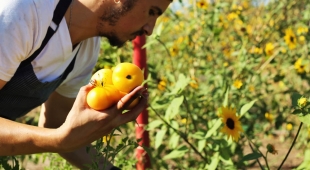 VEGAN GARDEN DINNER
What a joy to harvest organic produce from a magical children's garden and then cook it all up in front of guests to help support Garden School Foundation who work to bring garden based curriculum to underserved public schools in Los Angeles. Guests were greeted with a tour of the garden at 24th Street Elementary School as appetizers and mocktails were served. Apart from one appetizer that contained cheese, this plated dinner was entirely vegan so we could focus on the bounties that we can all grow and feast upon. Recipes from this event as well as additional photos can be found on The Chalkboard Magazine as well as The Local Rose. 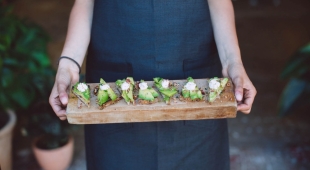 Judy Kameon Book Launch
When our friend, Judy Kameon of Elysian Landscapes launched her book "Gardens Are For Living", not only were we excited to be featured in it, but we also were thrilled to cook for her various book signing parties. Individual Medley in Atwater Village hosted this one where we served a couple of cocktails and some tray passed appetizers for guests to snack on as they celebrated Judy's book. We shared a couple of recipes from this event as featured on Chalkboard Magazine. Photos: Elli Lauren Photography 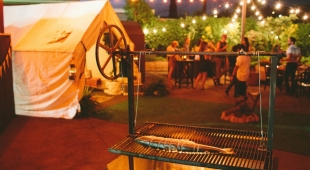 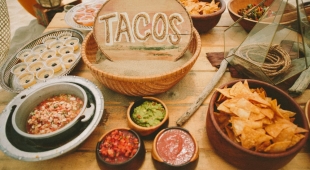 Beach Party Buffet
Featured on 100 Layer Cake, this vintage beach inspired birthday party was a direct order from our drop-off menu... except for the artisanal "Jell-O" shots! It's simple to re-plate our drop-offs and make it all your own as shown here. Expertly styled by Aaron Hartselle Creative, there were no details missed. Photos: Laura Goldenberger 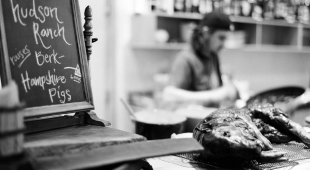 Hudson Ranch at Silverlake Wine
Every Sunday Silverlake Wine Tasting is a ton of fun and the best bargain in Los Angeles offering up 4 courses of food and 5 flights of wine for $20. We cook for these tastings once every couple of months, usually joining in when an impressive wine maker is on board as well. On this particular Sunday we teamed up with Hudson Ranch in Napa and actually flew to the ranch a few days before to collect fresh eggs, produce and a baby pig donated by the ranch to cook for this tasting. Our friend Autumn de Wilde went with us to document this experience. It was the first any of us had witnessed a slaughter which was incredibly sobering and educational and reaffirmed to each of us our commitments to know where our meat comes from and how it is raised. Those in attendance of this event at Silverlake Wine got to taste the difference of a fresh pig that forages for it's own food and is not subjected to hormones. Lee Hudson discussed why he began ranching and organic farming before he presented his renowned wines and then touched on the process of how he grows and ages his grapes. Featured in The Los Angeles Times, it was an unforgettable Sunday. 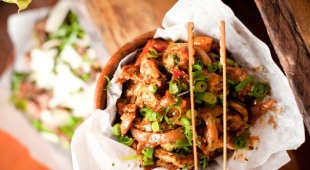 Ladies Luncheon
This lunch offered many gluten-free and some vegan options with our Lettuce Wrap Buffet, but also, for the more indulgent, there were a couple types of Lasagna Cupcakes and a hearty Dessert Table. Photos: Robyn Von Swank 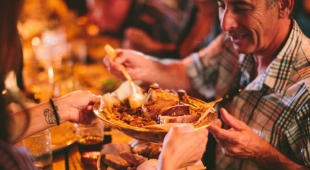 Cook Pigs in The Salon
We have been purchasing our pork from Cook Pigs Ranch in Julian, CA ever since we got wind of them. Krystina and Mike Cook who own and operate this sustainable ranch feed their pigs avocado, macadamia nuts, acorns, fruit, apple pie scraps, tortillas, and barley so we played on that for our menu that we developed for a dinner out in our garden to honor them and what they do. We began with a cocktail hour in The Salon and then moved out back where dinner was served Family Style so all of our chefs could eat at the table and join the conversation of humane ranching, organic farming, sustainable cooking and delicious eating. This dinner was featured on The Chalkboard Mag. Photos: Jennifer Emerling 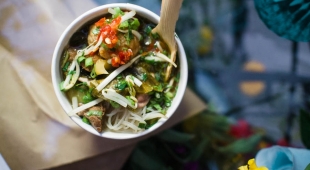 Poketo in The Salon
Poketo is a gift store downtown that believes in "art for your everyday". The owners, Angie and Ted, are Korean and Thai so we thought it would be fun to throw a "street" party in our garden where we had four action stations of Thai and Korean street food and drinks for 200 guests. Poketo created a pop-up store in The Salon and then out back we worked to create our interpretation of a Thai and Asian street vibe with graffiti and color and action everywhere. There's was music and movies and photo booths, and of course… lots of food. This event was featured in The New York Times and 100 Layer Cake. Photos: Stephanie Collins 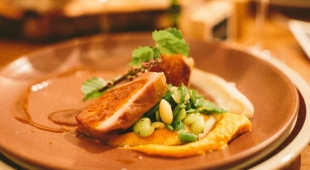 Caduceus in The Salon
We have done several tastings with Maynard James Keenan but always at Silverlake Wine so when he said his winery, Caducues Cellars, was launching some very sophisticated Rosés, we thought it would be fun to create a dinner to pair them in a more formal setting. We began with a cocktail hour in our garden where we set up a rock n roll meets Arizona atmosphere to tip our glasses to Maynard's day job and also the state where his wine is produced. Then guests made their way into The Salon for a dinner that continued our rose, peach, oxblood and black color palette. Both Maynard and Matt spoke to guests before each course to discuss how they were produced respectively. After the final course, guests were invited out back again to finish off their wine and for another dessert to end this enchanting evening. Photos: Jennifer Emerling 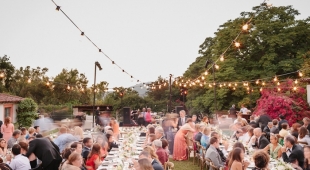 Wedding in Ojai
The wedding of Jessica and Jake was held at the magical Twin Peaks Ranch in Ojai, CA and was featured on Style Me Pretty. Photos by Erin Hearts Court. Design by Bash, Please 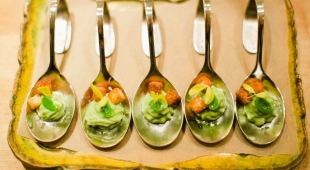 Warby Parker in The Salon
Warby Parker hosted a little dinner party with some local bloggers where they tried on glasses while having some appetizers and then sat down for dinner around our U-Shape table as Matt cooked right in front of them. Everyone received a pair of glasses as well as a full belly. Photos: Jennifer Emerling 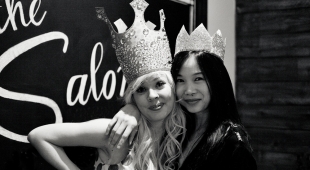 Appetizers in The Salon
Our friend Bri Emery of Design Love Fest invited 30 friends for her 27th birthday party in The Salon where guests snacked on appetizers and margaritas in customized sequined crowns she had made for them. Photos: Bonnie Tsang 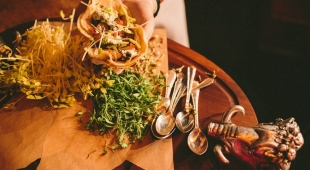 Oaxacan Wagon in Our Garden
Our friends from Shark Pig wanted to throw a party for all of their commercial clients in our garden so we suggested a theme of Shark and Pig, as in shark and pig tacos with a color palette of grey and pink. Guests came in through The Salon to make their way out back where YEAH Rentals decked out the space into a lounge area around our Oaxacan Wagon that we used to make the tacos. Photos: Jennifer Emerling 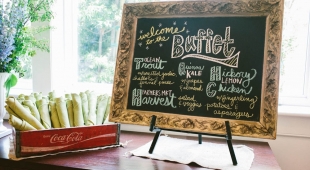 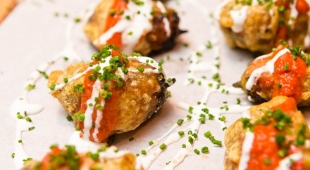 Dinner at Bash Please
The ladies of Bash Please curated a dinner for some girlfriends they work with at their studio in Culver City and featured it on Design Sponge. They incorporated some of the beautiful raw shell beans we were cooking which added a pretty pop of color to their lovely table. Dinner was family style service where Matt set up some bunsen burners and cooked each course in front of everyone. Photos: Aaron Shinataku 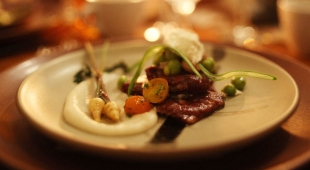 Handsome Coffee in The Salon
Starting out in our garden with cocktails and appetizers, our friends from Handsome Coffee joined us for a dinner we collaborated on in The Salon. They brought in their gloriously beautiful La Marzocco to pair different styles of coffee for each course of this exquisite dinner. Photos: Max Wanger 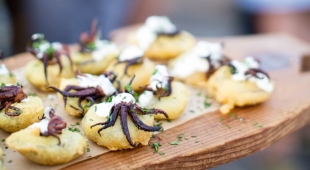 Habit Wine in The Salon
For one of our first collaborations in The Salon, we teamed up with Jeff Fischer of Habit Wine for a traditional wine and food pairing. We began with a cocktail hour out in our garden and then guests seated themselves in The Salon as Jeff and Matt presented each course. This event was featured in The LA Times. Photos: Annie Mc Elwain 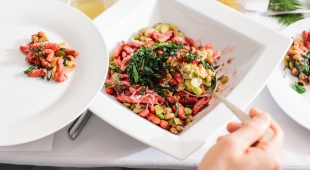