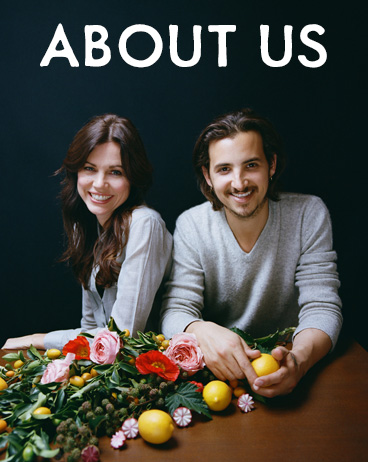 IT STARTED WITH LASAGNA CUPCAKES™

In late 2008, Matt Poley and Tara Maxey zipped a pasta machine into a backpack and ventured out during off hours of their regular kitchen jobs to set up shop in commercial kitchens around town—basically wherever would have them. Whether from delirium or just a quirky culinary vision, the Lasagna Cupcake™ was born: comfort food to fit the palm of your hand. Catering gigs followed and as work got busier, the two hired friends and called themselves Heirloom LA.

A POWERHOUSE OF CULINARY TALENT

Originally from Clarkston, MI, outside Detroit, Executive Chef/Co-Owner Matt Poley began “catering” at an early age, cooking for friends and family at high school tail-gate parties before football games. In 2004, he moved to Los Angeles, where he was classically trained by Gino Angelini of Angelini Osteria and from there, sent to intern at the two-star restaurant, Vissani, near Orvieto, Italy. Centrally based on a small farm and completely self-contained, this was where Matt learned the value of personally knowing where he sources his ingredients. Matt continues this tradition at Heirloom LA, seeking out small farms and humanely raised livestock for the fresh ingredients in his dishes.

Co-owner Tara Maxey, formerly Heirloom LA’s pastry chef, trained with Suzanne Griswold of Spago and Elizabeth Belkind of Cake Monkey Bakery. Although she still jumps in the kitchen, Tara now primarily runs the company’s marketing and public relations. A California native who has traveled the state observing the negative impact of industrial agriculture on the environment and the inhumanity of factory farming, Tara is passionate about the need to change our country’s food system. Recently appointed by Mayor Eric Garcetti as a Los Angeles Commissioner to the Commission of Community and Family Services, she plans to advocate for progressive food policy, along with other issues and needs facing the city’s most disadvantaged groups.

At Heirloom LA, we believe healthy eating is a right, not a privilege. Everyone, in our view, should know what’s in their food and who grows and raises it, and to have convenient access to fresh produce and whole grain food. We are committed to supporting small, local organic farms and promoting education and welfare around this work.

Far too often youth aging out of the foster care system end up homeless or incarcerated. The Alliance for Children’s Rights works on behalf of these youth to help provide a bridge for a different future. Our entire staff has been trained by The Alliance to be a mentor to this population so that we can offer employment and coaching to several youth at a given time in an effort to assist in their success.

As public schools struggle in Los Angeles, music programs have been slashed and students miss out on the valuable opportunity to learn the joys and discipline that music brings.  Silverlake Conservatory of Music has ushered in a dynamic music program for LA youth, and grant scholarships and instruments for those in need. Anyone is invited to attend recitals thereby creating an enriching experience for the community.

Among many other attributes, the Environmental Working Group annually highlights the cleanest and dirtiest conventionally raised fruits and vegetables to help you shop smart as they expose the food industry’s biggest offenders. We endorse their original, game-changing research that inspires people, businesses and governments to take action to protect human health and the environment.

People with developmental disabilities are among the most marginalized of our society. Ability First in Pasadena works to bring a broad range of programs to this population so that they experience more opportunities to make choices and feel valued as we move to build a culture of inclusion.

To hear a child ask to go pick some kale to snack on while the science of soil is being discussed will make a believer out of anyone that garden based curriculum should be incorporated into all schools. However, these edible classrooms rely on the steadfast commitment of volunteers and donations to exist. We support Garden School Foundation which operates these programs in low-income areas throughout Los Angeles.

Genetically engineered foods enter the U.S. food system in staggering quantities, yet our country doesn’t require their labeling. Just Label It is a national coalition dedicated to mandatory labeling of genetically modified foods. We stand behind this campaign to give consumers the right to know what’s in their food so we can all make informed choices about what we eat and feed our families.